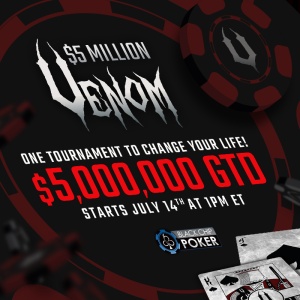 Americas Cardroom (ACR) is ready to bring back the Online Super Series (OSS) Cub3D series for its eighth appearance this July and this series is going to be brighter than ever. Making its debut during the series is the $5 Million Venom, the biggest tournament ever launched by any US-facing poker sit. Get ready for something never seen before.

The $5 Million Venom has a guaranteed $1 million for the tournament winner and Day 1B will be the featured event of the upcoming OSS Cub3D 8 series on July 21st. This incredible event will run through July 24th and the OSS Cub3D will run to August 18th, offering over $13 million GTD across more than 160 events. Here's what's coming:
The Mini Online Super Series gets things rolling, running July 21st to 28th. This series is for those who like smaller stakes and will offer events with buy-ins as low as $1. Don't miss out on the $88 buy-in Main Event with $300k GTD.
Next, the Online Super Series will run from July 29th to August 11th. Buy-ins range from low to high and offer something for everyone. Its two-week session concludes with a $540 buy-in Main Event on August 11th with a guaranteed prize pool of $1 million.
Bringing it all home will be the Bigger Online Super Series on August 12th to 18th. The high rollers will enjoy this series, which offer larger buy-ins and smaller fields. $1 million in guaranteed cash is waiting at the $2,100 buy-in Main Event on August 12th.
Adding the $5 Million Venom to the OSS Cub3D is going to make this summer even hotter and now is the time to start getting ready. ACR is offering a number of possibilities to pick up a seat for free at the $5 Million Venom, plus there are also satellites for as low as $4. For more details on this incredible opportunity, check out https://www.americascardroom.eu/online-poker-promotions/5-million-venom/.